The day a new CCTV system is handed over to the client everyone stands back and admires the clarity of the images and pats each other on the back for job well done. So it would be great if that new image still had the same wow factor six-months later, but without the proper care and maintenance it’s unlikely.

One of the key factors of picture degradation is dirt and grime. CCTV cameras often get installed in places where atmospheric conditions are less than perfect. Sites defined as critical national infrastructure (CNI) such as highways, power stations, industrial complexes all create dirt and cause grime to build up on the screen of the camera. The result of this grime is the pictures lose sharpness and clarity. 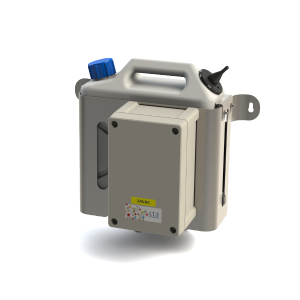 A loss on picture quality is only one of the side effects of a dirty screen. If you are using a camera with an auto-focus lens then the lens will try and focus on an individual piece of dirt, over and over and over. This will commonly result in the lens motor burning out a lot quicker than in normal operating conditions. Loss of picture quality and now an expensive repair – not a good news story. That can be even worse if you are trying to use video analytics or video motion detection and the camera is getting confused between an object of interest and a bird deposit.

It is very common for a wiper to be used on a high-quality CCTV installation but without a screen washer the wiper just smears; try it on the windshield of your car.

The only real alternative to cleaning the screen with an automated wash / wipe system is an engineer on a ladder. Considering costs and working-at-height regulations this is not a realistic alternative, even less so if your camera is on a custody site as a ladder near a prison wall isn’t exactly ideal for perimeter protection.

Once installed the washer unit needs nothing more than the occasional water fill and with the option of a low-water alarm even this can be monitored. The unit has been designed to make refilling quick and easy and as the pump is self-priming the process can be done in moments.
The modest cost of a CCTV washer unit such as the WA series can saves save not saves thousands in maintenance costs in the future as well as preserving the functionally of the security system.